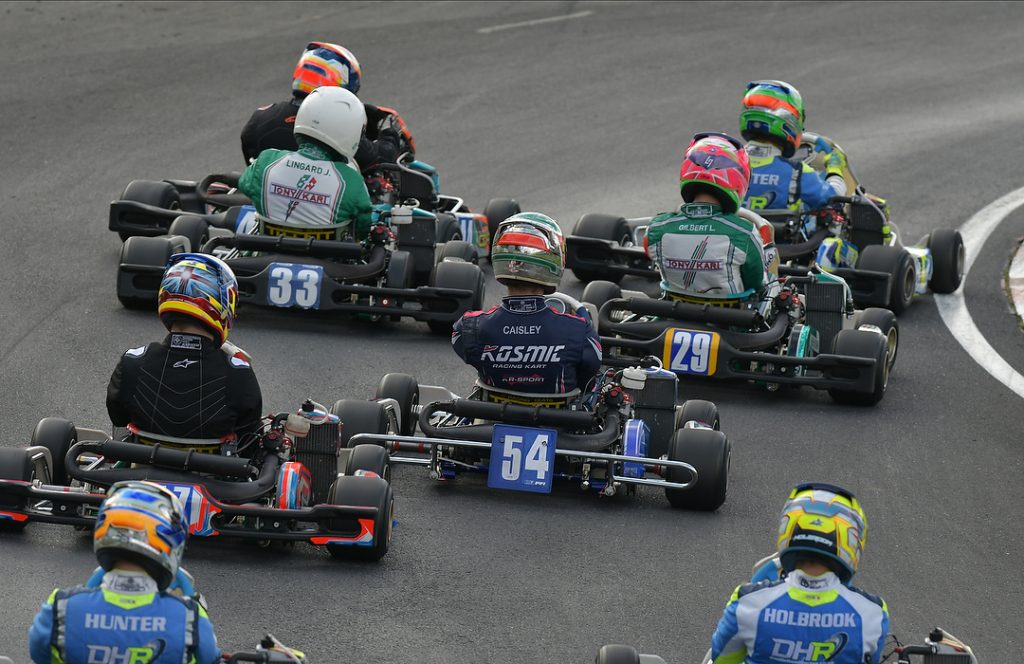 Over 90 drivers from three Rotax racing headed to the “Home of British Karting,” as Trent Vally Kart Club once again hosted the second round of the TVKC Autumn Cup for 2020, as drivers far and wide made their way to Lincolnshire to secure their claim towards a successful campaign.

With the weather making its impact felt on the Saturday, Sunday was a different proposition all together, and it made for some exciting developments out on the circuit itself.

GP plate winner Harry Linden was not to be denied the perfect weekend at TVKC, as the Welsh driver would first storm his way to take pole position in Timed Qualifying by 0.09 seconds ahead of KR-Sport’s Alfie Gallagher in the #19.

The #77 of Harrison Crowther would complete the top three, 0.21 seconds off the fastest lap, but would have his third lap removed from the session, due to cutting the track at turn 5. Bryn Collins took fourth with a 1:19.08, ahead of Xcel Motorsport’s Arun Phull in the #28, which saw the top 12 covered by just 1.55 seconds.

Linden would initially finish ahead of Mckenzie Douglass in the first heat, but the #25 would first have a five-second front fairing penalty, before being excluded from the race, due to a technical non-compliance. As a result, the #69 of Cruz Speakman would be promoted to second on the road, 4.6 seconds behind the race winner, ahead of Gallagher.

Phull would move up a further place to take fourth after the results were confirmed ahead of Ben Crossley (#12), with both Crowther and Collins finishing sixth and eighth respectively, as the #54 of Mikey Porter would move up three places to take seventh. 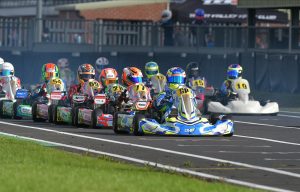 It was two for two in the heats for Linden, as he was able to ensure that he would be on the all-important pole position for the final, clinching victory by 3.67 seconds ahead of Gallagher, who would have to fight hard to fend off Phull for the runner-up spot in the race by just two tenths of a second. Douglass would have a better time of it in heat two, finishing in fourth place, a further 0.43 seconds adrift, with Collings managing to make it into the final position of the top five.

But it was no surprise that Linden was going to be able to hold on for the win in the final, taking a maximum score of 60 points, but despite Phull’s best efforts, the #28 would have to settle for second best at the finish after 8 laps. Crossley would take a well-deserved third place, 2.6 seconds ahead Collins, whilst Speakman would complete the top five.

Junior Rotax – Gardner starts the ball rolling, but Armstrong has the last laugh!

36 drivers would have a small chance to get themselves up as high as the grid as possible, but it was the #32 of Luis Gardner, who secured pole position by 0.27 seconds, ahead of Archie Kitching (#17), with Project One’s Will Egby (#77) completing the top three, a further 0.08 seconds behind. Jamie Perilly was 0.62 seconds off the fastest time set by Gardner, securing the #40 fourth place, whilst Oliver Duffell in the #30 entry from Coles Racing, was the only other driver out of the entire grid to go into the 1m16s bracket by just 0.01 seconds, thereby completing the top five. Five drivers would lose their best times, due to front fairing penalties, whilst the #50 of Leo Licastro was excluded due to a technical non-compliance.

A duel emerged between the fastest drivers in qualifying during heat one, but it was Gardner that narrowly took the win over Kitching by three tenths of a second at the finish. The #12 of Daniel Armstrong was able to used his race craft to move up from ninth on the grid to take third, but ran out of time to close on the top two, finding himself 2.5 seconds behind. Duffell would be only able to muster as high as fourth, with Vision Motorsport’s Jez Williams (#68) completing the top five.

Another close affair for the win in heat two saw Gardner again have to fight hard to cross the line first, and this time managed to stay ahead of Williams by just 0.61 seconds, whilst Duffell completed the top three. Callum Voisin (#35 – Coles Racing) would start from outside the top ten, and make good progress to end up finishing in fourth a tenth behind Duffell, ahead of Egby, who was a further 0.33 seconds behind. 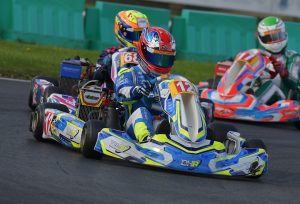 Kitching was third initially, before he was one of four drivers who were hit with a post-race five-second penalty for front fairing post-race, whilst Joshua Vallance was excluded for a technical non-compliance.

But it was Armstrong who was able to make it count in the final on Sunday to win by a mere 0.12 seconds ahead of Kitching, with Kieran Kay (#73) rounding out the top three overall. A spirited drive from privateer Neo Clarke saw the #18 move up 10 places from 14th to end up fourth, ahead of Duffell, who dropped to fifth at the end of the 14 laps of racing.

Senior Rotax – The Hunter brothers try their best, as Lingard gets ahead at the finish!

Timed Qualifying saw the top ten in Senior Rotax covered by just over 1.6 seconds, but only half a tenth split the #95 of Kai Hunter who took pole position, ahead of the #44 of Nathan Chafer, with Scotland’s Lewis Gilbert (#29) being a further 0.13 seconds adrift, rounding out the top three drivers.

A four-way fight for the initial victory of the weekend in heat one would see Kai Hunter again keep his head and shoulders above the rest of the field, but it saw him win the race after 10 laps, 0.3 seconds ahead of Gilbert, followed by both George Holbrook (#60 – DHR) and Rhys Hunter, with the top four covered by 0.79 seconds. James Lingard (#33) was the next driver to cross the finish line in fifth, over two seconds ahead of Coles Racing’s Tom Adams.

It was a brotherly 1-2 for heat two, as Rhys Hunter finished 0.42 seconds ahead of brother Kai, with Chafer not being able to try and go for the victory, taking third in the process, 0.65 seconds further behind. Holbrook would make his way up from seventh to finish in fourth, ahead of Lingard, with Ben Caisley (#33), Adams, Gilbert, Mick Barrett Racing’s Hugh Lawrenson (#80) and IPK Racing UK’s Rob Ellis (#46) completing the top ten. 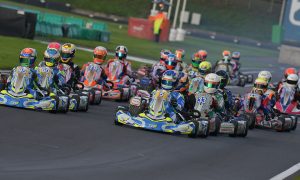 But Lingard was able to make sure that the victory was his after 14 laps, which saw two drivers penalised for gaining unfair advantages and four hit with front fairing penalties.

The #33 took the win in the final by 2.56 seconds ahead of Chafer, who set the fastest lap of the weekend whilst leading four of the laps, before Kai Hunter and James Lingard taking their turns at the front of the field. Hunter would round out the top three overall, taking the flag just 0.33 seconds behind Chafer, with Myles Barthorpe (#22) and Liam Wright Racing’s Lewis Smith (#84) completing the top ten.

The penultimate round of the 2020 Trent Valley Kart Club Autumn Cup has now opened its entry books, as the drivers will head back to Paul Fletcher International in just four weeks’ time to race for glory once again between October 31st and November 1st.

To find out all the relevant results for the second round, click on the following link:

To enter the third round itself, click the link to start registering your entry: