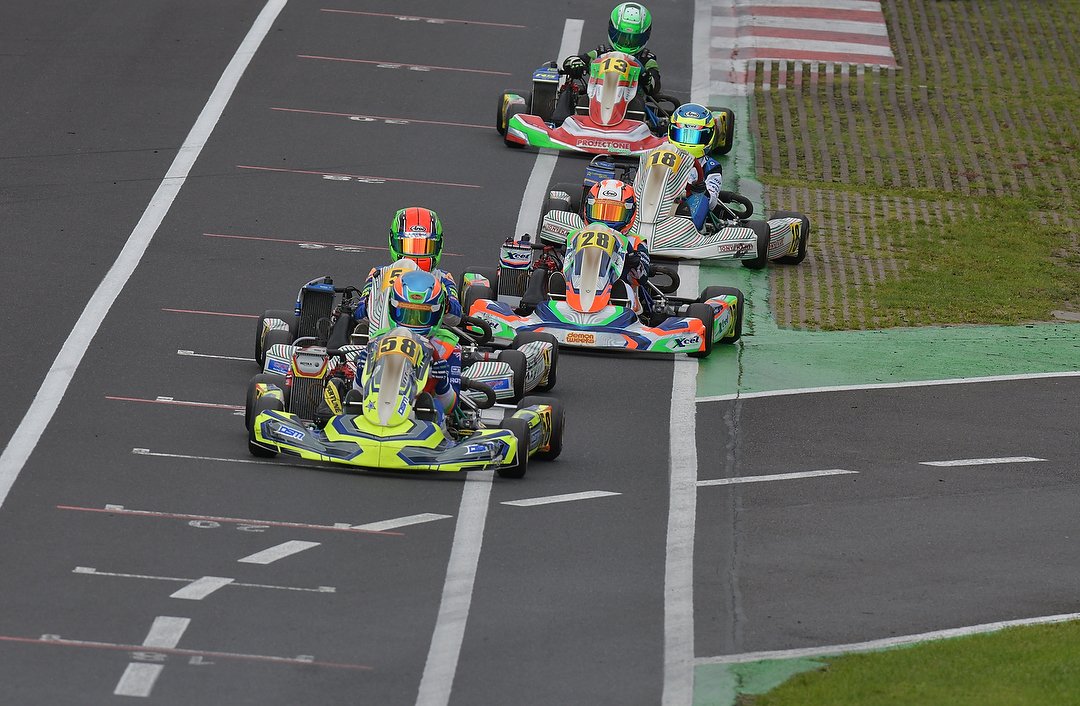 A total of 54 Rotax racers in three classes would head to the “Home of British karting” in the first weekend of September, as Paul Fletcher International circuit, Trent Valley Kart Club’s home, would host the opening round of the 2020 Autumn Cup.

A total of four rounds, which sees this campaign conclude in the first weekend of December, will give the drivers a chance to win a free entry to the 2021 TVKC Winter Series, which includes free practice sessions. All events that are currently being held at the circuit are also under strict restrictions, as a result of the COVID-19 pandemic situation, but it did not detract from an interesting first weekend of the campaign.

In Mini MAX, AR Sport’s Alfie Gallagher (#14M) was able to make it a clean sweep in the class, taking Pole Position on Saturday in Timed Qualifying, before winning both heats and the final on Sunday to leave PFI with the standings lead, taking home a maximum score of 60 points for his efforts.

Pierson Bullock-Carter (#15) and Ben Crossley (#56M) showcased good consistency throughout the weekend, but were unable to get on level terms with Gallagher during proceedings, as the pair would complete the top three overall behind the #14M entry.

Xcel Motorsport would complete the top five, thanks to the pair of Arun Phull (#28M) in fourth and Jacob Gillman (#18M) fifth, with the pair having their fair share of fight backs to deal with. Phull would show good progress initially in qualifying, taking fourth, whilst Gillman was 11th.

But Gillman took fourth in heat one, with Phull a further four positions back. The pair would also have been separated at the end of the Final on Sunday, had it not been for a front fairing penalty for Harrison Crowther in the #77M post-race. 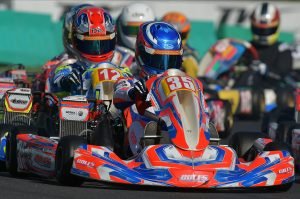 Callum Voisin was able to get a foothold on the top of the standings in Junior Rotax, having taken pole position by 0.27 seconds from Archie Kitching, before the #35 lost out in heat one to the #17 for the victory by 1.26 seconds, with Oliver Duffell (#31) completing the top three. DHR’s Daniel Armstrong (#12) took fourth, ahead of the #27 of Callum Green.

Voisin would have to battle hard with Armstrong for the heat two win, taking the chequered flag and securing the victory by a mere 0.12 seconds, whilst Leon Henderson (#94) was third after 12 laps. He then followed that up with a convincing win in the final, beating Kitching by 2.61 seconds, with Armstrong, Olli Goodyear and Duffell rounding out the top five.

Senior Rotax, which provides some dynamite action in its own right, had George Holbrook (#60) lead the way during the weekend, and head into the second round in October topping the standings.

He secured pole position by an incredible margin of 0.36 seconds, with the #80 of Hugh Lawrenson and Coles Racing’s Tom Adams completing the top three in the session. Jake Douglas (#15) and Rob Ellis (#46) rounded out the top five in Qualifying, which saw the first five drivers covered by 0.73 seconds, with it being even closer between the remainder of the top ten, with a split of just 0.18 seconds. 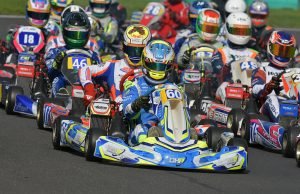 Holbrook would end up winning heat one by 3.37 seconds from Lawrenson, with Adams hot on his heels for the runner-up spot, but the #17 missed out by 0.21 seconds at the flag. Jake Douglas initially was fourth, but would drop to sixth, as a result of a flag infringement penalty, thereby promoting Spencer Shinner (#55) and Ellis to finish fourth and fifth respectively.

It was two for two on the Saturday for the #60 in heat two, this time initially crossing the line 2.45 seconds ahead of Douglas, who was handed another penalty, this time for front fairing, which thereby promoted Tom Adams to the runner-up spot, with Douglas officially classified in third. Lawrenson would take fourth, 8.15 seconds off the eventual winner, as Ellis took fifth, thanks to Shinner also being handed a five-second front fairing post-race.

14 laps was more than enough for Holbrook to seal off a clean sweep at PFI in the first round of the Autumn Cup, winning the final by 6.89 seconds from Lawrenson, with Douglas steering clear of trouble to take third. Adams would drop two places during the final to come across the line in fourth, ahead of the #84 of Lewis Smith.

The next round of the 2020 TVKC Autumn Cup takes place between the 3rd and 4th October.

To find all the relevant results for the opening round, click on the following link: https://www.apex-timing.com/goracing/results.php?path=/tvkc/2020/20200906&group=1 ( TVKC Autumn Cup Round 1 2020 Results )

Entries are also open for Round 2 in early October, so book your place before they all run out – https://www.trakentries.co.uk/clubclone/club.asp?C=14 ( TRAKDATA | Your Personal Race Stuff )