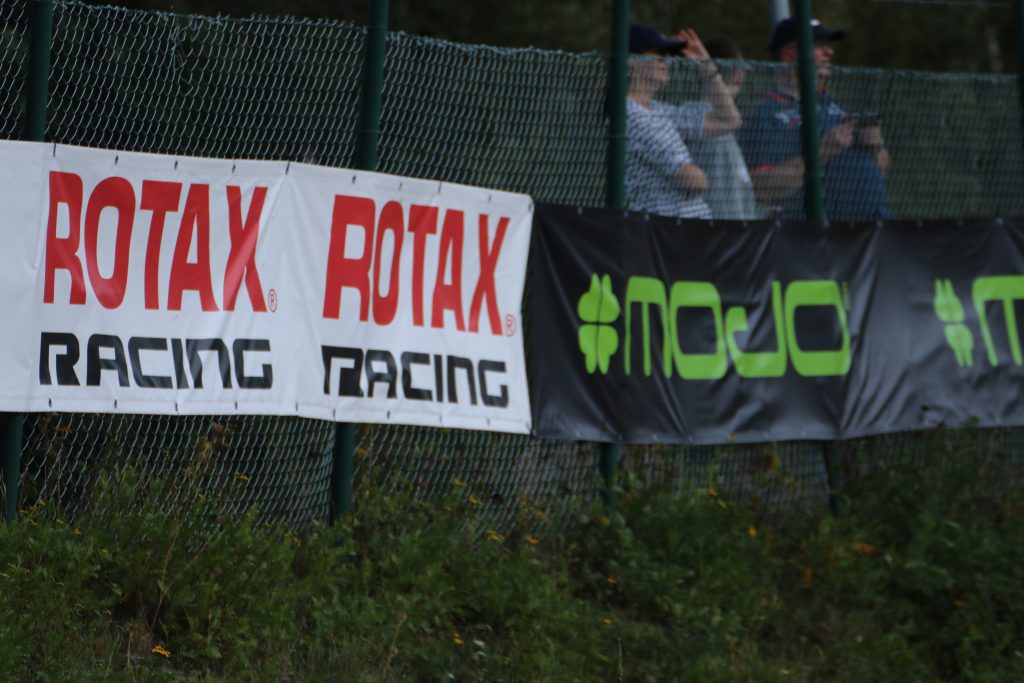 Between September 4th and 6th, the Prokart Raceland Circuit at Wackersdorf in Germany hosted the half way point of the 2020 Rotax MAX Euro Trophy season, which would welcome some very special guests in the form of the Deutsche Elektro-Kart Meisterschaft (DEKM).

It saw 115 competitors from almost 20 different countries compete at the 1,190-metre circuit over two action-packed days of competition, with drivers looking to put themselves into prime position for a championship push. With Junior, Seniors and DEKM having some welcome British representatives to their respective ranks, we took a look at what happened back in Bavaria. 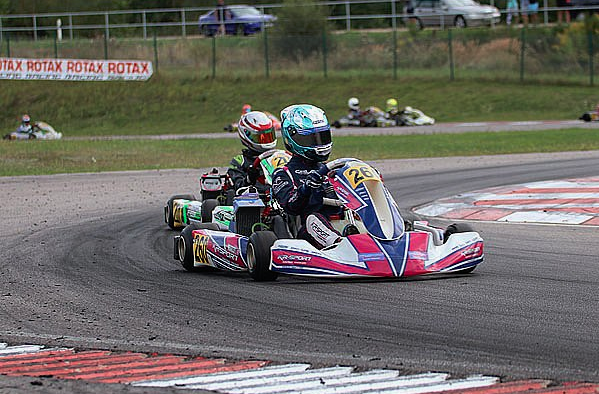 KR-Sport would be the only ones fielding a British driver in Junior Rotax, as Freddie Spindlow (#260) showcased his pure speed in qualifying, despite being excluded post-session, for having been found to be underweight. However, starting from the back of the grid did not phase the youngster in heats on and two, where he fought through the field from 27th on the grid to take third and fourth respectively.

Heat three was a different story, as a multi-kart incident saw him finish in 22nd, but he would still end up eighth after the intermediate classification, which was led by the #296 of Eliska Babickova (CZE – TEPZ Racing Team). The two finals saw Spindlow finish fourth and second, putting him on the final step of the podium with 33 points to his credit, three points off Germany’s Valentin Kluss (#201 – RS Competition), as Belgium’s Kai Rillaerts (#274 – JJ Racing) took a double victory to extend his lead heading to Adria.

Seven drivers from our shores headed to the circuit in Senior Rotax, which saw Strawberry Racing’s Mark Kimber take a convincing double victory on Sunday to hit the top step, amidst a highly-competitive grid of 38 drivers. The Briton was able to showcase his prowess, having been in the Junior Rotax in the 2010s, and could not be touched by the rest of the field, finishing ahead of the UAE’s Lachlan Robinson (#326 – KR-Sport) on the podium. 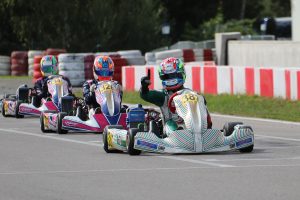 Defending Senior Rotax champion Mathilda Olsson (#300 – Strawberry Racing) took third overall, and now taking the lead in the standings by just two points. Sean Butcher was the second-highest placed Briton in fourth at the end of Sunday’s racing, finishing a mere two points off Olsson, having finished in eighth and third place respectively, after struggles in the second half of the qualifying heats on Saturday.

Charlie Turner (#361 – Dan Holland Racing) would factor into the sharp end of proceedings, as the Briton had returned to familiar surroundings, finishing in sixth and seventh in both finals to come away from Germany with 19 points, finishing behind Germany’s Vincent France (#357 – JJ Racing) by just two points in the weekend classification.

Lewis Glibert (#329 – SCO – Potenza Racing Engines) was on course to bring himself into the fight for the Senior Rotax crown, having capped off Final 1 by finishing third, but would subsequently retire whilst leading in the last race on Sunday after suffering wheel dramas, which saw him end the weekend on 16 points in eighth overall.

Dramas for both James Johnson (#337) and Sodi-Vitesse’s Bradley Barrett (#327), along with Kearn Tsang (#381) saw all three drivers not able to secure points towards their respective campaigns, with the latter battling as high as seventh in one of the earlier heats.

The Deutsche Elektro-Kart Meisterschaft brought a new atmosphere in the Rotax MAX Euro Trophy, as they too would provide a showcase towards a new direction of karting, thanks to Project E20 being put front and centre in the limelight, with all 12 drivers taking part in two Qualifying Practices, Pre-Finals and Finals over the course of Saturday and Sunday. 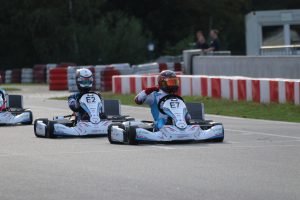 Axel La Flamme was the sole British driver in the field, which had drivers from the United States of America, Italy, Switzerland and Germany in the line-up. The #E7 was able to secure a front-row seat in both qualifying sessions, posting the second fastest time in both sessions. He was able to take the runner-up spot in both Pre-Finals behind 2019 DEKM runner-up, Germany’s Luka Wlömer (#E2.

But in the final, the Islington-based driver was able to make good his intentions and would win Final 1 on Saturday afternoon from Wlömer by 0.468 seconds, with the latter beating Joel Mesch (GER – #E9) by 0.001 seconds at the finish. It was a different story on Sunday afternoon, as when being passed by Italy’s Diego Stifter for the lead through Turn 11, La Flamme’s throttle was stuck open, causing him to go off track, and spin around in the process in the early goings. The Briton’s weekend would end shortly afterwards, as the mechanical black flag saw him retire on lap eight.

The Rotax MAX Euro Trophy will now head to its penultimate venue of the 2020 season, as Adria Karting Raceway, based in the Veneto region of Northern Italy is set to provide further exciting twists in the story not yet set in stone between October 23rd and 25th. Micro and Mini MAX drivers will also return onto the grid for the last two rounds, with more tickets for the Rotax MAX Challenge International Trophy still up for grabs.

This is before the newly-announced season finale location of Karting Genk: Home of Champions where we will see nine tickets given away in Belgium for the relocated Rotax MAX Challenge Grand Finals, which take place at the Kartodromo Internacional Algarve in Portimao between January 23rd and 30th next year.