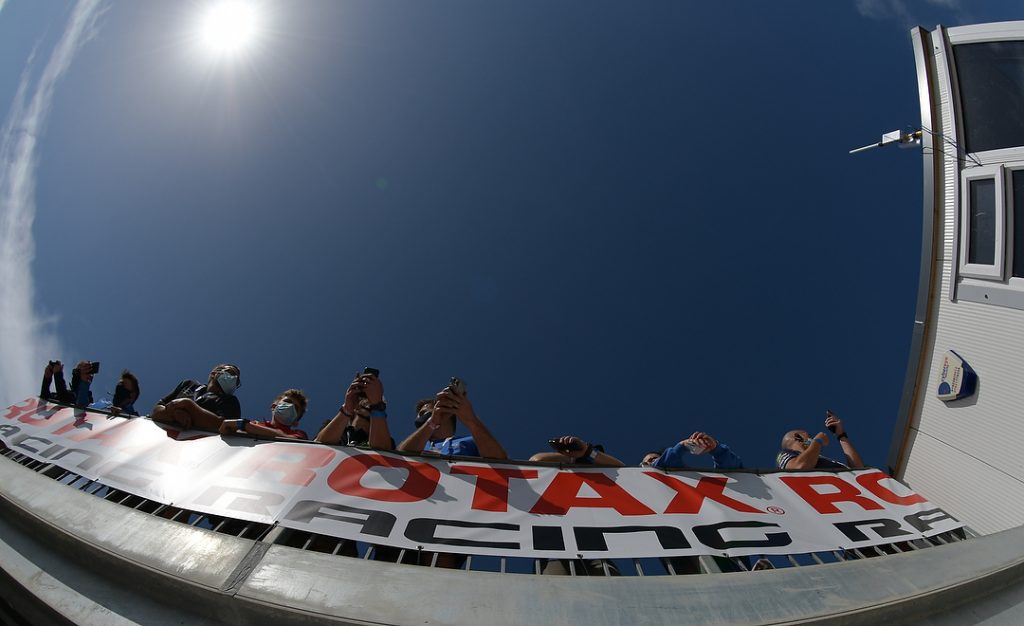 After a lengthy delay, following a hive of inactivity resulting from the COVID-19 pandemic, the Rotax calendar for the 2020 Motorsport UK British Kart Championships got back into full swing this past weekend, as the 1100-metre circuit hosted a total of 114 Rotax racers over four classes in Kent.

Having now been extended to the current track length back in 1996, there have been further developments at the circuit, which has been run by owner James Clarke since February 2011. It is also the base of the Clarkekarts team, with James’ son Cameron competing currently in Senior Rotax.

18 drivers in the Mini MAX class would battle for the initial lead in the standings after round one, but it was Dan Holland Racing’s Welsh wonder Harry Linden (#GP) that was able to come out of the weekend with a maximum score of 130 points, having won both the pre-final and final on Sunday.

Coles Racing’ Mckenzie Douglass (#24 – Wales) would be fastest in Timed Qualifying with a 38.66 second lap time, fractionally edging out Vision Motorsport’s Steven Duncan (#16 – Scotland), who kept ahead of Team Clay Racing’s Finn Smith in the #19 for second place. With all drivers covered by 1.19 seconds, it was a close-fought affair especially with the top ten drivers, rounded out by Xcel Motorsport’s #31 of Aurn Phull.

Jaxx Motorsport’s Michael Porter (#55) and Privateer Bryn Collins (#12) were ahead of Linden, who completed the top six, whilst Ben Crossley (#56 – Vision Motorsport), KR-Sport’s Alfie Gallagher and Pierson Bullock-Carter (#15- Coles Racing) completed the top nine, and could have been even closer to the sharp end of qualifying.

Finn Smith took the first win of the season in the first heat, but had to fight Duncan for it until the end of 17 laps of action, taking the chequered flag by just 0.18 seconds, with pole sitter Douglass a further 0.05 seconds adrift in third place. Bullock-Carter and Linden would complete the top five, ahead of Phull. Bryn Collins would take seventh, ahead of a resurgant Chloe Chong from DHR (#18), who had been excluded in timed qualifying, whilst Cruz Speakman (#69 – Privateer) and Crossley completed the top ten. Project One’s Jai Lawrence crossed the line in sixth, but would drop to 13th post-race, after a five-second front fairing penalty was issued to the #28.

Heat two saw Linden take the victory, with Douglass in second, just 0.12 seconds off the GP plate holder. Porter completed the top three, but was 1.8 seconds off the lead battle, as Duncan and Lawrence finished fourth and fifth respectively. Gallagher initially finished in fourth place, but would also have a five-second front fairing penalty, dropping the #14 to 11th. Crossley was sixth, ahead of Smith, Phull, privateers Joe Garaway (#58) and Harrison Crowther (#77). Mason Perren (#30 – Pirvateer) would have made it as into the top ten, but would also drop to 12th place, due to a front fairing penalty. Cruz Speakman would drop to the last of the drivers to cross the line in 16th, as a result of an advantage-by-contact post-race penalty, with Collins out of the race with three laps to go. Bullock-Carter would not even be able to complete one lap.

The Intermediate Classification saw Douglass lead Linden in the final stages of the race weekend, despite them being level on points, as Douglass had a better combined set of results, putting the #24 ahead. Duncan was third, a further point behind the pairing, who in turn was one point ahead of Finn Smith. 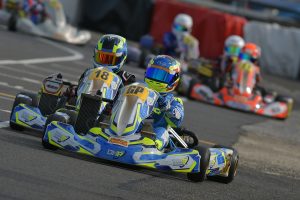 The Pre-Final saw Linden narrowly take the win after 20 laps of the circuit, just 0.07 seconds ahead of Finn Smith, with the top five six drivers being covered initially by 0.78 seconds, before Arun Phull was demoted down to seventh, having been deemed to gained an advantage by contact, receiving a five-second post-race penalty. Bullock-Carter was third, but was closely followed by Steven Duncan and Ben Crossley, with the trio rounding out the top five. Mckenzie Douglass’ race would unfortunately come to an end on lap 12, being the only driver to not complete the full race distance.

Linden would put a dominant stamp in the Final, winning with the biggest margin of the weekend, taking a maximum score of 130 points to lead ahead of Bullock-Carter, who would finish second in the standings and second in the 25-lap final by 5.18 seconds behind the Dan Holland Racing driver. Steven Duncan completed the top three, and would take fourth in the standings, behind Finn Smith, who secured fourth in the race, just 0.08 seconds behind the Scot. Crossley completed the top five and leaves Kent with 116 points, where second to eighth are covered by just 11 points.

It was always set to be an ultra-competitive affair in Junior Rotax, with the grid being bolstered by 37 drivers at the circuit, seeing them split into two group for Time Qualifying. Wales’ Matthew Higgins (#75 – DHR) not only took the top spot in Group 2 with a 37.32 second lap time, but would be the fastest out of everyone, after the classification was officially set in stone.

Vision Motorsport’s Jez Williams (#68) was 0.07 seconds off Higgins for the top spot overall, with DHR being represented again in the top three, thanks to Daniel Armstrong (#14), whilst KR-Sport’s Harley Haughton (#20) and Coles Racing’s Callum Voisin (#35) completed the top five, who were covered by 0.14 seconds.

GMS Karting’s Caitlin May would be fastest in Group 1, putting the #52 second overall in the way that qualifying works in the current format. Argenti Motorsport’s Archie Walker (#90) was 0.04 seconds off the #52 in second place, ahead of privateer Declan Russell (#16), Logan Parker (#95 – Coles Racing) and Mattie Hingeley (Argenti Motorsport – #13).

Heat 1 would see Russell take the win after 17 laps, having initially started out the outside of row two, finishing ahead of KR-Sport’s Freddie Spindlow (#60), who also made up seven places to finish second, ahead of Voisin. A pair of Project One Racing drivers completed the top five in the form of Jamie Perilly (#40) and Will Egby (#77), who both started 14th and eighth respectively. Vision Motorsport’s Jack Meakin (#91) was sixth, in front of Coles Racing’s Harri Reynolds, who made it from outside the top ten in 12th to finish in seventh. DHR’s Joe Linden (#79) was eighth, with GP Plate winner Harrison Collings (DHR) and Sam Gornall (Coles Racing) rounding out the top ten.

Caitlin May did cross the finish line on the road in what would have been seventh, but was deemed to have broken formation during the start, demoting the #52 to 17th, whilst William Walker (#45 – KR-Sport), Mckenzy Cresswell (#32 – DSM-Sport) and Drew Perry (#64 – Privateer) all were handed five-second front fairing penalties post-race. 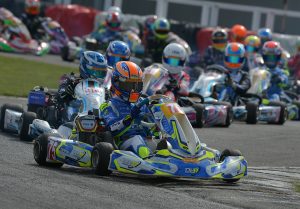 Higgins was next up to take a win in Heat 2, as the Welshman drove away from the rest of the competition, finishing the race 2.89 seconds ahead of KR-Sport’s Harkey Haughton (#20), with Walker taking third, just 0.24 seconds ahead of Collings, as Hingeley completed the top five. Voisin took a solid result to start the weekend with sixth in a close race, that saw the top 11 finishers covered by 7.58 seconds. Jez Williams would drop down to seventh in the #68, as Alex Hughes (#15 – KR-Sport), Ryan Willis (Project One Racing – #42) and Vision Motorsport’s Tristan Rennie secure the last few positions in the top ten.

Higgins also secured his second heat win of the weekend in Heat 3, but would have to fend off Walker to take the victory, this time by a not-as-comfortable 0.78 seconds ahead of the #90. Daniel Armstrong showed good pace once again to take third in the race, staying ahead of both Haughton and Hingeley at the chequered flag. Rennie was sixth across the line, ahead of Kay, Meakin and the KR-Sport pair of both Spindlow and Hughes.

Spindlow would have been declared the winner, had it not been for flag violation breach during the race, as the #60 was handed a five-second time penalty. Along with that, both Jessica White (#37 – CHDD) and Lewie Weaver (#69 – GMS Karting) would incur front fearing penalties post-race.

The Repechage saw nine out of the 37 drivers entered to try and gain a place in both the Pre-Final and Final for Sunday, with only six drivers being able to progress. William Walker would take the win, 0.40 seconds ahead of Jessica White, with Project One Racing’s Rito Komata (#21) rounding out the top three, 1.07 seconds off the eventual winner. CHDD also had the #26 of Oliver Martynski make it through, with GMS Karting’s Poppi Stephenson (#11) and Drew Perry being the last two to qualify for the remaining two races.

It may have been Matthew Higgins that was leading the way going into the two finals, but the way the story unfolded in Kent turned out otherwise. Collings would strike first in the Pre-Final, taking a close-fought win by 0.17 seconds ahead of Hingeley, with Higgins completing the top three, who were separated by just 0.90 seconds after 20 laps of racing. Voisin was fourth, ahead of Rennie, Archie Walker, Armstrong, Reynolds, Kay and Weaver.

Will Egby would have factored into the Pre-Final, but was one of five drivers that would incur a front fairing penalty, dropping the #77 from what would have been seventh to 16th. Team Clay Racing’s Jordan Morris would be excluded from the race, following on from having been seen to causing excessive contact. 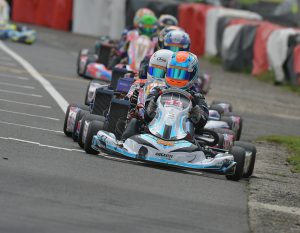 Walker would then go on in the Final to take the win, having started in fifth place, securing Argenti Motorsport’s first main win in a national setting and in Rotax, winning from Kieran Kay by 0.47 seconds, with Hingeley making it a 1-3 for Argenti in the very same race. Haughton would have to settle for fourth in the end, despite having made up seven places, finishing ahead of KR-Sport team mate William Walker. Jack Meakin, Jamie Perrilly and Jez Williams would storm their way up the order from the lower part of the grid to finish in sixth, seventh and eighth rspectively, whilst Callum Voisin and Logan Parker completed the top ten.

Both Walker and Hingeley are tied on 122 points after the first weekend out of four Junior Rotax weekends this season, with DHR’s Harrison Collings a mere five points behind, with it still all to play for. Don’t forget to read Part 2 of our Rotax Report from Lydd from tomorrow, where we will be covering Senior Rotax and Rotax 177!