After the opening round back at Lydd, the second round of the 2020 Motorsport UK British Kart Championships headed to the North East, as Warden Law Kart Club, based in Sunderland, would welcome the Rotax fraternity, with drivers ready to battle for the standings lead in each class at the half way point.


The 1200-metre circuit would welcome a total of 92 drivers to the heavily re-developed circuit, which was looking very presentable, thanks to the efforts of Matt Hunter and the entire team at Karting North East.


Even with the weather almost making Sunday almost a washout, it didn’t stop all the competitors and the teams working hard off and on track to get the best result possible.


Smith would take victory in the first heat, with Bullock-Carter second, after the pair had gotten past Linden, who would complete the top three. Vision Motorsport’s Steven Duncan (#16) took fourth behind the current GP plate champion from Kartmasters this year, whilst Gallagher initially took fifth. However, the #14 would later be shuffled down the order to sixth, behind Crossley, having been deemed to have gained an unfair advantage.


Heat two saw Finn Smith initially finish second, but a five-second post-race penalty for Coles Racing’s Mckenzie Douglass (#24) saw the latter demoted to the runner-up spot for having gained an unfair advantage buy the officials. Douglass’ team mate, Cruz Speakman (#69) would start from tenth on the grid, but charged his way through the rivals in front to round out the top three. Linden would have also been in the top five, having crossed the line in fourth, but would suffer the same penalty as initial winner Douglass. This would thereby promote Chloe Chong (#18 – DHR) to the final spot in the top five. 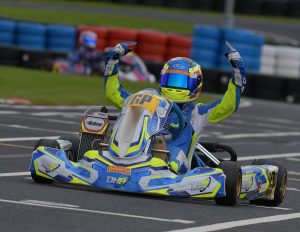 Smith might have headed into the Intermediate classification on pole, but the Scot would have to settle for fifth in the Pre-Final and third in the Final. Duncan would win the Pre-Final ahead of Linden, with Crossley and Douglass completing the top four.


The Final would then see Linden win an exciting four-way battle for the victory, as the GP plate champion crossed the finish line 0.31 seconds ahead of Douglass, with Smith third. Ben Crossley rounded out the top four, who were covered by just 0.71 seconds at the finish, whilst Duncan would finish 0.94 seconds ahead of Chloe Chong.


Junior Rotax: Welsh wonder Matthew Higgins (#75 – DHR) would get off to a great start by securing pole position in Timed Qualifying with a 49.73 second lap time, whilst team mate Daniel Armstrong (#14) would be a mere 0.19 seconds off in second. Coles Racing’s Callum Voisin (#35) would be 0.010 seconds off Armstrong, meaning he would take third, with KR-Sport’s Alex Hughes (#15) also being the same time fraction off being in the top three. Sam Gornall also helped to bolster the ranks of the top five, as the #96 posted a 49.96 second lap time, putting him ahead of the likes of Argenti Motorsport’s Mattie Hingley (#13) and KR-Sport’s Harley Haughton (#20).


Higgins would win heat one, 0.73 seconds ahead of Voisin, with Armstrong, Hughes and Vision Motorsport’s Tristan Rennie (#74) making his way up from tenth to complete the top five, who were covered by 1.94 seconds after 13 laps. It was again the #75 of Higgins that would win heat two, but it was a lead of 10.25 seconds ahead of Voisin that saw the DHR driver take the win before the Pre-Final, putting him on pole position after Intermediate Classification. Gornall would complete the top three, whilst Jez Williams (Vision Motorsport – #68) and Mattie Hingeley rounded out the top five. 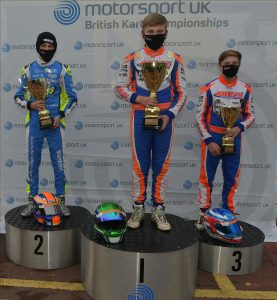 Hingeley would win the Pre-Final by 3.70 seconds ahead of Voisin, whilst Gornall made it two Coles Racing drivers in the top three, finishing third, after Higgins was given a five-second penalty post-race for ignoring the relevant flags being shown, demoting him to sixth behind Haughton and Rennie. But Gornall would come out on top to win the Final by a mere 0.53 seconds ahead of Higgins, who fought back from sixth to take second. Callum Voisin would round off his weekend of consistency by completing the top three, 1.14 seconds off Higgins, with Project One’s Jamie Perilly (#40) soaring his way up to finish fourth, ahead of Hingeley.


Senior Rotax: 42 drivers would compirse of the biggest grid of the weekend, with brothers Kai (#95 – DHR) and Rhys Hunter (#5 – DHR) making it a 1-2 in the first Timed Qualifying group, with Kai putting in the best lap of all with a 48.67-second lap time, 0.14 ahead of Rhys. Potenza Racing Engines’ Lewis Gilbert (#29) completed the top three in the session, a further 0.11 seconds adrift, with Nelson King (#97 – DHR) and Coles Racing’s Edward Matthews (#18) completing the top five.


Argenti’s Morgan Porter (GP) would fight his way up from seventh to win the first heat from Edmunds by 0.17 seconds after 14 laps, whilst James Lowther made his way up from fifth to third, ahead of Gilbert. Rhys Hunter crossed the line in fifth, but had to keep Sodi Vitesse’s Bradley Barrett at bay, with the #4 0.41 seconds away from getting a welcome top five finish.


Kai and Rhys Hunter would make it a brotherly 1-2 in heat two, as Kai would get a comfortable lead to take the win by 4.69 seconds over Rhys. It was a clean sweep for Dan Holland Racing, as both Holbrook and King would be closely followed by Elswood, Charlie Turner (DHR – #61), Coles Racing’s Tom Adams (#17), Lewis Malin (Haworth Racing – #8), Teddy Clinton and Vision Motorsport’s Jenson Watts (#36), who completed the top ten.


James Lowther would be declared the winner of heat three, even with the fact that Barrett and King crossed the line first and second, but both were hit with a five-second front fairing penalty post-race, demoting the pair back a place each, thereby completing the top three. Kai Hunter would also suffer the same fate as Barrett and King, dropping the #95 to fifth behind Porter at the finish.


The repechage was won by Vision Motorsport’s Josh Poulain in the #12, with it being very close between the top three, who were rounded out by Sam Stansbury (#37 – Privateer) and DHR’s Ryan Luscombe (#99). Xcel Motorsport’s Chris Simpson (#49), Team Clay Racing’s #65, Ryan Taylor-Trueman, and Maciej Hamera (Vision Motorsport – #11) would be the rest of th six drivers to make it through to both finals. 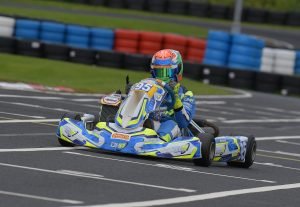 Lowther would make it to the finish first in the Pre-Final, which saw the top four drivers cross the line, covered by 0.81 seconds. Rhys Hunter would finish ahead of brother Kai, with the pair completing the top three. Tom Edmunds took fourth, and would finish 0.21 seconds ahead of Porter, with Nelson King, Joseph Taylor (#32 – Argenti Motorsport), Kearn Tsang (#81 – Privateer), Lewis Gilbert and Vision Motorsport’s Ben Burgess (#13) competing the top ten.


Kai Hunter would take another win, rounding off his weekend in the best way possible by winning the Final by 0.83 seconds from Porter, with Nelson King finishing over a second adrift in third. Lowther, who won the Pre-Final, took fourth, in front of Tom Edmunds, ahead of Rhys Hunter, who started second. Lewis Gilbert, Joseph Taylor, Teddy Clinton and Lewis Malin completed the top ten.


Rotax 177: Timed qualifying saw GMS Karting’s #56 of Chris Thomas set the fastest time of anyone, breaking the 50-second bracket by 0.02 seconds, 0.03 seconds ahead of KR-Sport’s Henry Ayers (#29), with Oliver Appleby (#34) making it two GMS drivers in the top three. Even with seven drivers on the grid, it was still ultra-competitive, as all were covered by a mere 0.38 seconds.


Louis Large (Coles Racing – #13) took victory in heat one, 0.34 seconds ahead of Matthew Easton (#95), with Appelby completing the three, but it would have been different had Ben Davis (#86 – DHR) not been handed a five-second front fairing penalty post-race, demoting him back to sixth.


Large would again win heat two, with a more comfortable margin of 1.71 seconds, ahead of Appelby this time, with Easton a further 2.78 seconds adrift in third. Davis took fourth ahead of Ayers, which would have been Thomas, who crossed the line in fifth, but fell foul of a front fairing penalty.


To get a full round up of all the results from last weekend’s action, click on the link below:


The penultimate round of the Motorsport UK British Kart Championships for 2020 now heads to Clay Pigeon, taking place between the 16th and 18th of October, with all coverage of the racing action on Sunday being covered via Alpha Live.