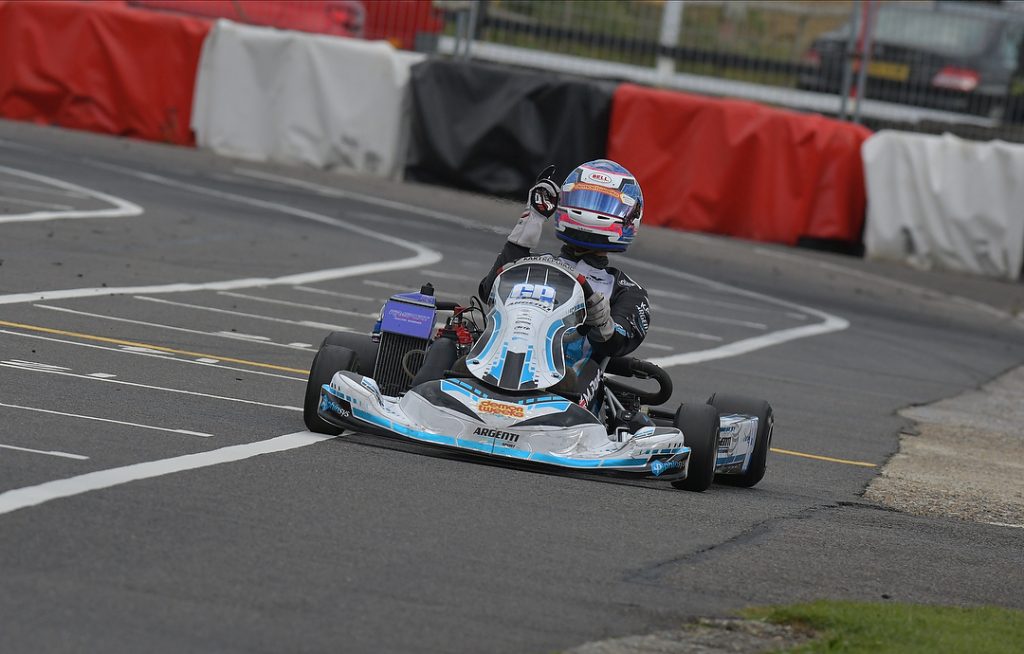 Senior Rotax: Argenti doubles up with Porter on the top step!

49 drivers would be the biggest Rotax grid all weekend, as the Senior Rotax ranks would battle all the way through the weekend for the top step and get their respective campaigns off to the best start possible. It would be a clean sweep for Dan Holland Racing in the top three for Timed Qualifying group 1, which was topped by George Holbrook (#60), who went fastest of all with a 36.34 second lap time, ahead of Nelson King (#97) and Teddy Clinton (#45), who were separated by just a tenth of a second. Vision Motorsport’s Maciej Hamera (#11) and Will Elswood (KR-Sport – #19) completed the top five, with Scotland’s Lewis Gilbert (Potenza Racing Engines -#29), Jack Steadman (Project One Racing – #62), Tom Adams (Coles Racing – #17), Luke Wooder (GMS Karting – #E) and Brandon Klein Nagelvoort (Coles Racing – #93) rounding out the top ten.

Group 2 would see Rhys Hunter (#5 – DHR) secure the top time by half a tenth of a second from KR-Sport’s Tom Edmunds (#15), whilst Alexander Baker (#23 – DHR) was a further 0.14 seconds adrift in third. Vision Motorsport’s Josh Poulain (#12) and Ben Caisley (#53 – KR-Sport) were both faster than Argenti Motorsport’s GP Plate winner from KartMasters, Morgan Porter, having completed the top five in the group. GSM Karting’s Josh Pullen (#41) was seventh, ahead of DSM-Sport’s Bradley Gill (#85), the #36 of Vision Motorsport’s Jenson Watts and Joseph Taylor (#32 – Argenti Motorsport).

Heat one saw another clean sweep in the top three for DHR, as King would take the win after 18 laps by just 0.1 seconds from pace setter Holbrook, with Clinton making it 0.12 seconds between the top three. Gilbert was able to gain two places to take fourth at the finish, but would run out of time to close the gap on the top three, whilst Elswood completed the top five. Team Clay Racing’s Tiernan Rourke (#54) would make up five places to take sixth, whilst Hamera, Steadman and Adams would each end up behind Rourke, with privateer Chris Simpson (#49) completing the top ten.

Edmunds would then fight back in heat two to take the win by two tenths ahead of Argenti’s Porter, with Rhys Hunter completing the top three, who were covered by just under three tenths at the finish. Argenti’s Taylor managed to power out of the lower half of the top ten to take fourth, with Kai Hunter (#95 – DHR) completing the top five. Coles Racing’s James Lowther (#9) took sixth place, 3.67 seconds off the winner, ahead of Vision Motorsport’s Ben Burgess (#13), Ben Caisley, Jenson Watts and Alexander Baker.

Porter would then become the third different winner in as many heats, taking the Heat 3 victory by 1.93 seconds from Edmunds, whilst the DHR pairing of Clinton and Holbrook would take third and fourth, in front of Jack Steadman. Burgess would finish 0.72 seconds ahead of Taylor in sixth place, whilst Elswood would drop three places during proceedings, taking eighth. Privateer Sam Stansbury would climb 16 places in the race to initially finish tenth, before Bradley Barrett (#4 – Privateer) incurred a five-second front fairing penalty which would drop him down to 14th, promoting Stansbury and Haworth Racing’s Lewis Malin (#6) into the top ten.

The final heat would see the winning ways of Rhys Hunter return, as the #5 secured a second victory by 1.53 seconds, ahead of Nelson King, with Ben Caisley completing the top three.
https:
//jagrotax.co.uk/wp-content/uploads/2020/08/Teddy-Clinton_9703-300x182.jpg
Alexander Baker would make it three drivers from DHR in the top five, which saw Lewis Gilbert from Potenza Racing Engines a further 0.15 seconds adrift. Tom Adams was able to move up from eighth on the grid to finish sixth, in front of Jenson Watts, whilst James Lowther closed out his final heat in eighth, followed by Team Clay Racing’s Ryan Trueman-Taylor (#65), who started down in 19th place, as Hamera closed out the top ten.

The Repechage saw 21 drivers battle for the last six places for both the Pre-Final and Final, where the top 28 drivers had already qualified for the latter stages, covered by just 30 points between them. Sam Stansbury was able to keep Haworth Racing’s James Tomsett (#98) at bay for the victory after 18 laps and won the race by 0.89 seconds, with GMS Karting’s Luke Wooder completing the top three. Lewis Halliday (#56 – Tam Clay Racing) took fourth, with MLC Motorsport’s Matt Armstrong (#24) and GMS Karting’s Riley Stephenson gaining the last of the coveted places. Bradley Barrett would originally have crossed the line to win, but would again be handed another front fairing penalty, dropping him to eighth.

The Pre-Final saw Porter hit his stride, as the Argenti Motorsport driver was able to take charge of the business end of the first round of the season at Lydd, winning from KR-Sport’s Tom Edmunds by 2.57 seconds after 21 laps, with Nelson King ending up third after the dust had settled. Lewis Gilbert would make his way up from seventh on the grid to take fourth, ahead of Teddy Clinton. Taylor would make it another top six finish for Argenti behind the #45, whilst Kai Hunter would fight his way through the order from 17th place on the grid to finish in seventh. The remainder of the top ten comprised of Tom Adams, Luke Wooder and James Tomsett, who gained seven, 22 and 20 places respectively, securing good points in the process.

But Porter again could not be stopped in the Final on Sunday afternoon, as the GP Plate winner finished on top of the 34-driver field, once again ahead of Tom Edmunds but but 4.77 seconds, whilst Teddy Clinton was able to fend off team mate Nelson King for the final step on the rostrum by 0.04 seconds at the flag. Lewis Gilbert would again secure another top five finish, this time it being fifth ahead of Tom Adams, with the pair almost side-by-side at the chequered flag. Sam Stansbury continued to impress as the best-placed privateer in the final, moving up from 16th to take seventh behind Adams, whilst Rhys Hunter wouls start from 33rd and take eighth, ahead of Will Elswood and Ben Burgess, who completed the top ten.

Porter leaves the Kent-based circuit with a maximum score of 130 points, leading the standings by 6 points from Edmunds, with Nelson King, Teddy Clinton and Lewis Gilbert rounding out the top five overall, with the latter three separated by a mere two points heading to the second round of the season. 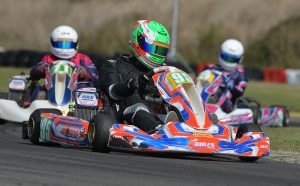 Even with just ten drivers in the field, Rotax 177 would still add to the action and atmosphere, with this class also now being confirmed to attend all four rounds of the amended calendar for 2020. Timed qualifying saw GMS Karting’s Oliver Appleby lead the way, securing pole position in the #34 with an impressive 36.76 second lap time, putting him ahead of GMS team mate Chris Thomas (#56) by 0.46 seconds, with Charlie Whaley (Mike Spencer Motorsport – #9) completing the top three.

Appleby would first to start off strong during the first heat, as he would end up securing the win by 1.73 seconds, with DHR’s Davis able to make up two places to take the runner-up spot in the heat, as Louis Large was also able to make it into the top three, 2.46 seconds off Davis, having started seventh. Whaley would end up in fourth, ahead of GMS Karting’s Thomas, with Easton having a struggle, but took sixth, ahead of Cowley, who started in ninth. Ayers would still stay in eighth place, despite a five-second penalty post-race for a front fairing infraction, with Ockenden rounding out the nine classified finishers, whilst Davis would retire on lap four.

GMS Karting’s Appleby would again win heat two, thereby taking the lead in the Intermediate Classification, but would not find the going as easy as in the first heat, winning ahead of Davis again, but the DHR driver was able to get within a tenth of a second after 17 laps, but still had to settle for second. Thomas would then round out the top three, ahead of Louis Large and Henry Ayers, who completed the top five. Ockenden would manage to move up the order to take sixth, after Whaley was excluded post-race for a technical non-compliance. Cowley crossed the line in seventh, being the last of the classified finishers, as Easton retired on lap 15, with Colin Davis’ race abruptly ending on lap ten.

The Pre-Final saw DHR’s Ben Davis take a hard-fought win, beating GMS’ Thomas by 0.83 seconds to the chequered flag after 20 laps, with Easton getting his best result of the weekend so far in third place. Appleby would only be able to muster as high as fourth, 0.37 seconds off Porter, as Henry Ayres would still be able to complete the top five. Colin Davis, being the only privateer in the field, took sixth, followed by Charlie Whaley, with James Ockenden finishing a lap off the leaders in eighth at the finish. Louis Large’s race would come to a sudden halt on lap three, with Ben Cowley being excluded for a technical non-compliance post race.

Easton, nevertheless, kept pushing and his efforts would be well rewarded with a win in the final, taking victory ahead of Pre-Final winner Ben Davis by 1.21 seconds after the conclusion of 25 laps of racing. Double heat winner Appleby completed the top three, keeping both Louis Large and Colin Davis at bay for the final step on the podium, as the trio were separated by a mere three tenths of a second at the finish. Ayres for KR-Sport took sixth at the flag, in front of Thomas, Whaley, Cowley and Ockenden.

Ben Davis leads the standings by just two points ahead of Easton at the end of proceedings for Round 1 of the season, followed by Thomas and Appleby, who are split by a single point.

The next round of the 2020 Motorsport UK British Kart Championships for Rotax now will head to Karting North East at Warden Law for another interesting chapter of the current campaign, which will take place between September 18th and 20th.

For all results for all four classes, click on the link below: